Initially the school was established and run in Surajmal Oswal Bhawan as Anglo Secondary. School, Garha. In 1942-43, The school was operated from Shri Jaiswal’s rented building with four rooms, subsequently it was acquired by Hitkarini Sabha; the land was attached to the 4 acre playground of the corporation.

Initially, Shri Sharad Dutt Padraha was appointed as the Principal of the school and later Shri Kunwar Lal Choubey, Shri R. N. Bose and Shri Bhagwati Prasad Mishr were on the designation. In 1958, the school was recognized as ‘Higher Secondary School’ and Shri Uma Dutt Padraha was made the Principal . At the same time, Hitkarini Sabha Member Shri Basant Kumar Mishra Donated 1 acre land to the school. Originally, the foundation of 8 classrooms was laid and 4 classes were built with the help and assistance of Sabha member and Jabalpur citizens. In 1988, with the efforts of Hitkarini Sabha Chairperson Smt. Ratna Kumari Devi and Sabha President Shri Prabhu Lal Karecha, the Primary section was established.

Since its launch, the school has been progressing successfully and continuously making its contribution near and surrounding Garha sub-urban area, towards the education and upliftment of students of all sections, especially the poor and to make them sensitive and responsible citizens. Meanwhile the school building was renovated in the year 2011-12. At present, Shri Rajneesh Shrivastava is serving as the Principal and Shri. Rajiv Tiwari as the Vice-Principal of the school. The school is running successfully with Maths, Biology, Commerce, and IP departments. 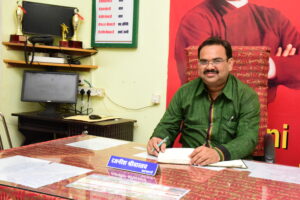